Excel- Crop Application:  Foliar application via boomspray fitted with the BLUE Tee Jets and with the screens removed. One 20 litre drum of Excel-Crop is added to 600 litres of water. This mixture applies approx. 7 litres of Excel-Crop per hectare (i.e. 600 litres covers 3 hectares). This is done preferably after rain but not on wet plants and later in the day. 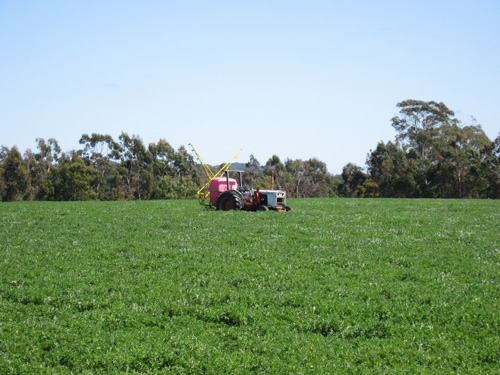 Lucerne Hay Yield: Below is a table reflecting bale production numbers since 2006 (when Excel- Crop was not used) through to the 2009 season. Use of Superphosphate as a general fertiliser has decreased 30% since using Excel-Crop. Figures in green are results with the use of Excel-Crop and show a substantial increase in bale numbers from 2006 to 2007 and steady increase in production since.

*some years 4 cuts have been made but not consistently for comparison purposes.

Notes: Excel-Crop was first used on the property during the 2007 hay season after which we noticed an immediate response from the lucerne stand. The stand appeared to “thicken” and its colour also intensified. We applied Excel-Crop twice during the growing cycle before the first cut and twice in between cuts approximately 2 weeks a part. Since using Excel-Crop we have never had any disease or pest affect the lucerne stand. In addition, worm numbers in the ground have been monitored, showing greatly increased numbers which can only mean soil conditions have improved. The increase in production and general plant health seems to be a direct result of using Excel-Crop as a foliar fertiliser.
Fattening/grazing store cattle is carried out for approx. 3 months at the end of the hay season as a lucerne management tool and we have been able to increase numbers from 25 to 40 head with the help of Excel-Crop. 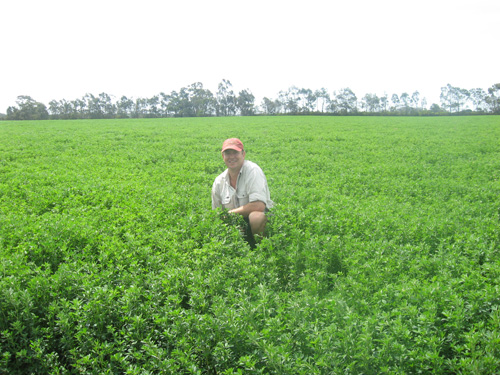